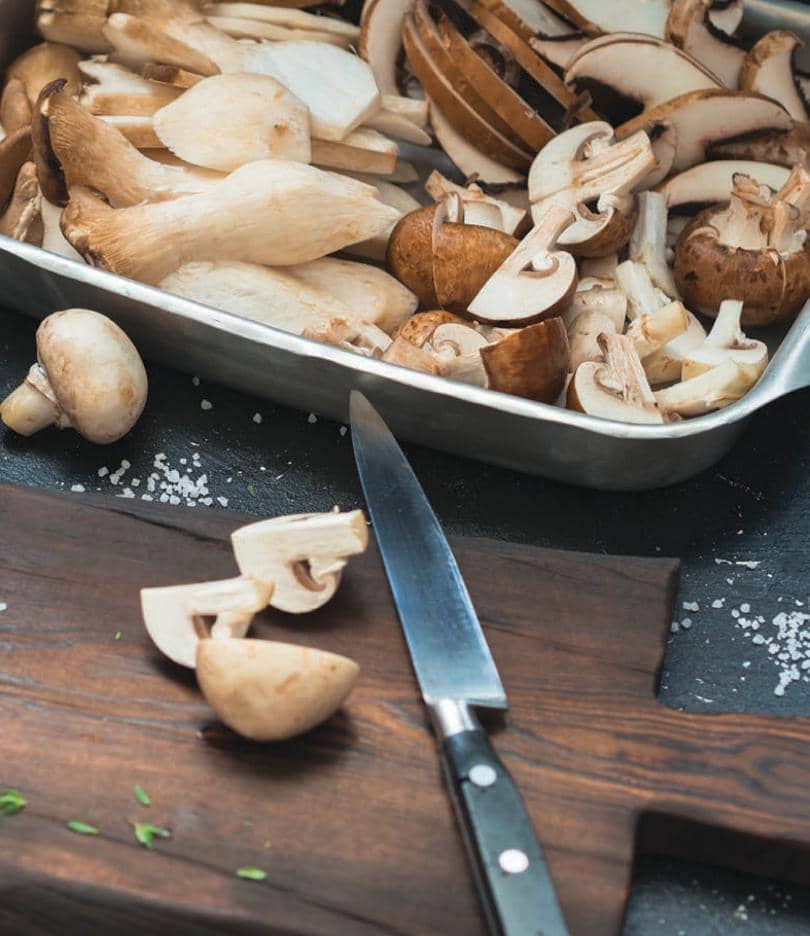 At first glance, mushrooms might seem unimpressive, but apparently they are the new “it” food and are good for more than just mealtime. “Mushrooms have been used for medicinal purposes for centuries,” says Bart Wolbers, MS, a researcher at Nature Builds Health. “Though each variety has its own unique properties, they are generally known for promoting heart health, well-being and immunity.” Here’s what you can expect from a few popular varieties.

This mushroom adds a distinct flavor to spaghetti, stir-fry or salads, and recent research shows it can aid in heart health and help decrease blood pressure. Shiitake also can help reduce cholesterol because of the presence of compounds called sterols and beta-glucan, according to a Japanese study. “Beta-glucans are a fiber that makes the gut lining thicker,” Wolbers explains. “That thicker lining prevents the dietary absorption of cholesterol.”

Mushrooms can serve as a flavorful meat substitute in plant-centric meals, and their inherent umami or savory essence makes them a great addition to many dishes.

Because of their woody texture and bitter flavor, reishi mushrooms are typically found only in supplement form. This variety is reputed to reduce inflammation and help prevent the onset of certain cancers by acting as an antioxidant when ingested, scavenging for and disposing of free radicals that can cause cellular damage. A study published in Biochemical and Biophysical Research Communications determined that reishi may even inhibit the proliferation of breast cancer cells.

Fun fact: All three of these mushrooms are of the same variety, and it’s simply the level of maturity that dictates its name — portobello being the most mature. Another fun fact: Mushrooms are the only natural source of vitamin D in the produce aisle, and these three contain the most. All three are also excellent for GI health. “They contain conjugated linolenic acid, which improves gut function and provides your system with new gut bacteria, which you may lack from other food sources,” Wolbers says.

If you’re looking to improve brain function and prevent brain disease, then this mushroom should be on your radar. “The carbohydrates in lion’s mane can travel to the brain and reduce oxidative stress, a damaging process that is the byproduct of both energy creation and aging,” Wolbers says. In studies done on aging mice, lion’s mane mushrooms induced an improvement in recognition memory. “A compound called NGF stimulates the creation of new nerve cells while also helping existing cells thrive,” Wolbers says. “Through that mechanism memory is also improved.

Known as the “dancing mushroom” in Japanese, maitake mushrooms may help prevent the side effects associated with diabetes by normalizing the immune system. “Type 2 diabetes is characterized by an excessive immune response and has some characteristics of an autoimmune disorder,” Wolbers explains. They also show promise in promoting fertility by counteracting polycystic ovary syndrome, a condition that inhibits ovulation in women. “Maitake helps reverse insulin resistance, which is a risk factor for PCOS,” Wolbers adds.

Another area in which fungi are improving health is in the realm of cancer treatment. “Medicinal mushrooms are thought to improve immune system function and reduce the incidence of treatment-related side effects,” says Jonathan Stegall, M.D., oncologist and director of the Center for Advanced Medicine in Atlanta. “Some studies also show them to have a cancer-cell killing effect.”

Stegall mainly uses maitake, turkey tail, reishi, shiitake and almond mushrooms in his treatment protocols because their clinical prowess is the strongest. “The evidence for their exact effects is limited, so medicinal mushrooms should serve as a complementary therapy alongside more traditional treatments rather than as stand-alone therapies,” Stegall advises.

Not all oncologists are familiar with the use of mushrooms in cancer treatment, so ask plenty of questions before deciding on a practitioner. And of important note: Patients on blood thinners may be at an increased risk for mushroom treatment because of the anticoagulant and antiplatelet properties of the fungi.

Trading out half your ground meat/poultry for chopped mushrooms adds vitamins and fiber while reducing sodium and fat, according to Eric Davis, a spokesperson for The Mushroom Council. The flavor and texture are hardly affected, and carnivores and veggie-averse kids will never know what’s missing or, more importantly, what’s been added!

Add mushrooms to a food processor and pulse until finely chopped. Combine mushrooms and turkey in a large bowl, mixing with hands. Place a skillet over medium-high heat, then add turkey mixture. Cook, stirring often until it begins to brown, about 5 minutes. Add onions and cook another 7 minutes, or until turkey is no longer pink. Drain excess liquid, then add barbecue sauce and heat through. Preheat broiler to high. Cut sweet potatoes in half lengthwise and scoop out the flesh. Add flesh to turkey mixture and stir to combine. Place potato shells on a baking sheet and spoon in turkey mixture, topping with cheese. Broil 5 minutes, or until cheese is brown and bubbling. Remove, sprinkle with scallions and serve.