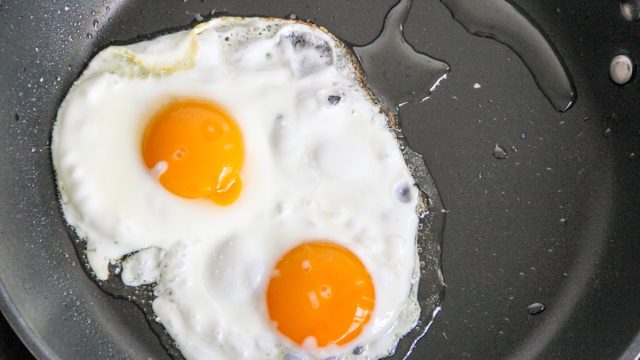 To eat eggs or to not eat eggs? There are plenty of health benefits tied to the food, however, as is the case with most foods—there are also some potential downsides to watch out for.

But first, let’s start with the positives. Egg yolks contain lutein, which is a type of vitamin called a carotenoid. It’s also related to beta-carotene, which has antioxidant properties. The vitamin has been shown to help protect eye health by staving off cataracts and improving symptoms associated with age-related macular degeneration (AMD).

Another reason not to skip the egg yolk? It’s loaded with a bunch of other key nutrients such as B vitamins, selenium, and phosphorous. However, the one thing that may make you walk away from the carton of eggs is the cholesterol content. Each egg contains about 200 milligrams of cholesterol, which is more than what you’d find in a Quarter Pounder with Cheese and Bacon at McDonald’s at just 115 milligrams.

Not to mention, eggs also contain saturated fat. Eating foods that are high in cholesterol and saturated fat are known to be risk factors for heart disease. A 2010 study published in the Canadian Journal of Cardiology found that people who regularly eat eggs have a nearly 20% higher risk of experiencing cardiovascular problems.

But, studies have also shown that the cholesterol you ingest from dietary sources (such as egg yolk) doesn’t necessarily raise cholesterol in the blood. Since your liver produces cholesterol, it adjusts how much it makes (depending on your intake of dietary cholesterol) to help even your levels out. This may be why, for most people, their cholesterol levels don’t rise at all when they eat eggs.

One study revealed that, in 70% of people, eggs didn’t elevate their cholesterol levels at all. For context, the other 30% had mildly raised total and LDL cholesterol levels. If you eat two eggs two to three times a week, you should be just fine. But if you’re eating three or four eggs each day, that’s when you may start to experience some issues. Consider speaking with a registered dietitian to find a recommendation that’s tailored to you and your body’s needs.