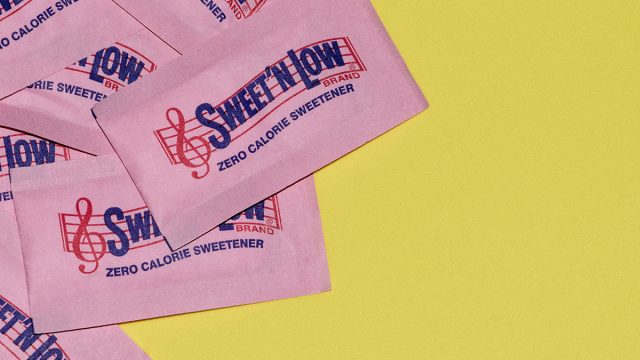 Both sugar and sugar substitutes have been shown to put people at a higher risk of developing type 2 diabetes—that is, until now. New research suggests that one sugar substitute may not play any part in causing diabetes in healthy adults at all.

According to a new study published in the journal, Microbiome—led by researchers at The Ohio State University Wexner Medical Center and The Ohio State University College of Medicine—says that saccharin is one such artificial sweetener that should no longer be of concern regarding diabetes prevention. The study was funded by The National Institutes of Health and The National Institute of Food and Agriculture.

Why do artificial sweeteners get a bad reputation in the first place?

If you’ve ever sprinkled Sweet n’ Low in your cup of coffee, for example, you’ve tried the hyper-sweet substance. However, due to the increased use of non-caloric artificial sweeteners (NCAS) and sugar alcohols—which are used in a lot of keto-friendly and other sugar-free food products and beverages—research has repeatedly questioned the safety of these alternative sweeteners.

Aside from the fact that many are turned off by the word “artificial” and are inherently skeptical about whether or not they could cause harm to the body, there is also science that backs up these fears.

“Some epidemiological, and a handful of intervention studies, have shown positive correlations between NCAS consumption and the risk of type 2 diabetes and other adverse metabolic outcomes,” George Kyriazis, Ph.D., assistant professor of biological chemistry and pharmacology at Ohio State and senior author of the study, tells Eat This, Not That!

“However, from a scientific viewpoint, these variable outcomes and ambiguity may reflect differences in the NCAS used, the characteristics of the studied population and the accompanied diet, or other methodological considerations related to these reports,” Kyriazis explains. “So, our group set to isolate these external variables and design a study using both humans and mice that explores the independent effects of saccharin feeding on gut microbiota and glucose regulation.“

What did this study find?

Researchers asked 46 healthy adults between the ages of 18 to 45 with body mass indexes of 25 (the cap for the normal range) to take one of three capsules every day over the course of two weeks. Participants either took the maximum acceptable daily amount of saccharin, lactisole (which inhibits the tongue from tasting something sweet), saccharin with lactisole, or a placebo.

“We found no effects of saccharin supplementation on glucose regulation and no changes in gut microbiota of participants,” says Kyriazis. “It is important to note here that the saccharin intake we used in our study is practically more than double the average intake of the most avid consumers of saccharin in the U.S.”

For context, the maximum acceptable daily amount of saccharin is 400 milligrams, which is far more than anyone would consume on a regular basis as the artificial sweetener is significantly sweeter than table sugar.

“Because it is 200-700 times sweeter than sugar, you only need a touch to deliver the same sweetness as sugar,” says Amidor. “This study looked at the maximum amount of saccharine, which is much greater than any person would consume at once.”

“Together, they highlight that high NCAS consumption may exert negative health outcomes accommodated by other physiological or dietary parameters,” he explains. “Consequently, more interventional studies are needed that concentrate in isolating and identifying the underlying physiological or lifestyle conditions that potentially makes NCAS use harmful.”

In short, healthy adults who eat foods or drink beverages that are sweetened with saccharin from time to time shouldn’t be too concerned about adverse, long-term side effects.